A Lymphoma Diagnosis Puts a Mother’s Life Plans on Hold 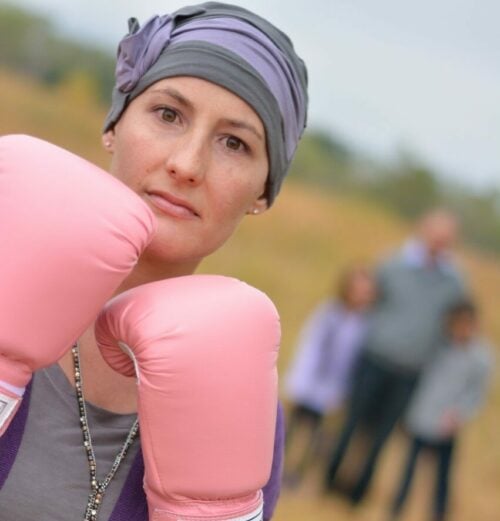 Andrea was in her thirties with two elementary school children when she decided to embark on a new career. Inspired by the incredible care her newborn son had received in the Neonatal Intensive Care Unit (NICU), she returned to school to become a NICU nurse. But, halfway through nursing school, it seemed cancer had other plans for her.

Working part-time at night, going to school full-time during the day, and caring for two kids were definitely taking a toll on Andrea. Still, when she started to have stomach pains, it became evident fairly quickly that it wasn’t just “stress” or “exhaustion.” Though she says she “didn’t have time for a stomach ache,” one night, the pain was so bad she couldn’t sleep.

After a failed attempt to address the pain with antacids and diet changes, Andrea returned to her primary care physician. Andrea made a prediction that took them both by surprise: “I think it’s cancer.”

Though cancer seemed unlikely, Andrea’s doctor ordered blood tests and an ultrasound, which revealed lesions on her spleen. A subsequent CT scan showed a very enlarged spleen along with numerous enlarged lymph nodes. It appeared Andrea was right: She did have cancer. At that point, Andrea’s primary care doctor referred her to Dr. Lori Jensen at Rocky Mountain Cancer Centers in Boulder.

Dr. Jensen is amazing,” Andrea says. “I’ve just been so impressed with all my doctors. They are excellent doctors who took really good care of me.”

Still, it would be 10 days before Andrea would get a conclusive diagnosis. Since most of her enlarged lymph nodes were not accessible for a biopsy, a PET scan was required to locate one, which turned out to be in her groin. The biopsy results indicated follicular lymphoma, the most common type of Non-Hodgkin’s lymphoma, a low-grade or slow-growing lymphoma.

Lymphoma is a blood cancer with diverse symptoms and prognoses. Read more about lymphoma from RMCC’s Dr. Burke.

Andrea’s cancer doctors put her on a chemotherapy regimen that required six treatments – with three weeks between them – at the Boulder cancer clinic. It was a grueling experience for Andrea and her family.

The difficulty of the experience was offset by the incredible support her family received.

“I had amazing help,” Andrea says. “My mom flew out from California for almost every treatment.”

In addition to assistance from neighbors and friends, Andrea’s husband carried the family through. Andrea says, “he made breakfast, lunch, and dinner for the family, got the kids to school and to their activities, took me to all of my appointments, took two days off to be with me for every treatment, then worked the rest of that week at home to be able to take care of me, and continued to work his full-time job. And he never complained once.”

Still, the hardest part of it all was the loss of Andrea’s dream of a career in nursing. “It was kind of heartbreaking to have to stop school and think ‘I might not be able to do this.’”

From the beginning, there was some ambiguity in Andrea’s condition. Her cancer behaved like two different types of cancer. Even after chemotherapy, her spleen kept lighting up on PET scans, indicating ongoing cancer. To make matters worse, a nodule on her thyroid – that had been diagnosed years before as non-cancerous – kept lighting up as well. Then a biopsy identified it as cancer too. Though surgery is not a common treatment for lymphoma, Andrea and her doctors made the decision to remove her spleen and part of her thyroid.

“Thyroid cancer felt like a slap in the face,” Andrea says. “I was so run down. I was depressed and anxious and scared. But, looking back, it was really pretty minor.”

The treatment took nearly six months. Yet, Andrea describes it as “five months that felt like forever.” Still, a few months after chemotherapy, Andrea was able to return to nursing school. Incredibly, she graduated only seven months later than planned.

In what seemed impossible in the midst of lymphoma diagnosis and treatment, Andrea became a NICU nurse at Children’s Hospital of Colorado. “Now I have my dream job. I’m so thankful for Dr. Jensen and the entire team that returned me to health,” she says.

Throughout her treatment and her ongoing monitoring, Andrea’s doctors at RMCC have taken an interactive, collaborative approach, involving her as the most important member in her own cancer care team. Thus, she participates in making decisions that feel comfortable to her and suit her life, which she really appreciates.

It’s been five years since Andrea’s lymphoma diagnosis. Now, twice-yearly follow-ups with her Boulder oncologist show consistently encouraging evidence that her cancer treatment was effective. Andrea’s doctors approached her cancer with “curative intent,” Andrea explains, which means “they treated it with the intent to cure it, but realize there is a possibility it might be a long-term condition. So far, it seems we’ve cured it.”

Read more about RMCC’s advanced treatments for cancers of the blood like lymphoma, including research and development of new therapies.