The stage of breast cancer helps the oncologist choose the best treatments for you.  Staging indicates the tumor size and whether lymph nodes are affected. It also refers to whether cancer has spread beyond the breast.

If your breast biopsy came back positive for breast cancer, the Rocky Mountain Breast Specialists (RMBS) team will review the results of the biopsy and any images available to determine the extent, or stage, of the disease as well as a few other important factors. This allows them to establish the best treatment plan. The stage is detected by various factors including the size of the cancer, whether the cancer has invaded nearby lymph nodes, and whether the cancer has spread (metastasized) to other parts of the body.

As part of staging breast cancer, we may use other tests to see if the cancer has spread. These aren't always necessary, especially if the cancer is caught early and is very small.

Tests for staging can include:

It’s understandable that you may feel nervous about these tests, however, they are a necessary part of the process. And, rest assured, we will do our best to make you feel comfortable. These tests allow your RMBS oncology team to see whether the cancer has spread and, if so, to what parts of your body. When breast cancer spreads, cancer cells are often found in lymph nodes under the arm (axillary lymph nodes). Breast cancer can also spread to almost any other part of the body, such as the bones, lungs, liver, and brain.

To understand how your RMBS oncologist determines the stage of your cancer, it’s helpful to know a little about something called the TNM system. The TNM staging system is a classification system developed by the American Joint Committee on Cancer for describing the extent of disease progression in cancer patients.

Any diagnosis of any stage of breast cancer can leave you feeling fearful and overwhelmed. However, understanding your cancer and knowing what to expect can help you and your loved ones feel more in control and cope with your diagnosis.

Stage 0 is sometimes used to describe abnormal cells that are not invasive cancer. For example, Stage 0 is used for ductal carcinoma in situ (DCIS). DCIS is diagnosed when abnormal cells are in the lining of a breast duct, but the abnormal cells have not invaded nearby breast tissue or spread outside the duct. Although many doctors don’t consider DCIS to be cancer, DCIS sometimes becomes invasive breast cancer if not treated.

Stage I is an early stage of invasive breast cancer. Cancer cells have invaded breast tissue beyond where the cancer started, but the cells have not spread beyond the breast. The tumor is no more than 2 centimeters (three-quarters of an inch) across.

Stage II is one of the following:

What is Early Stage Breast Cancer?

If you're diagnosed with early stage breast cancer, find out what to expect and what treatment options are available.

Stage III is locally advanced cancer. It is divided into Stage IIIA, IIIB, and IIIC.

Stage IIIA is one of the following:

Stage IIIB is a tumor of any size that has grown into the chest wall or the skin of the breast. It may be associated with swelling of the breast or with nodules (lumps) in the breast skin:

Stage IIIC is a tumor of any size. It has spread in one of the following ways:

Stage IV is distant metastatic cancer. The cancer has spread to other parts of the body, such as the bones or liver. This includes any T and any N with M1. 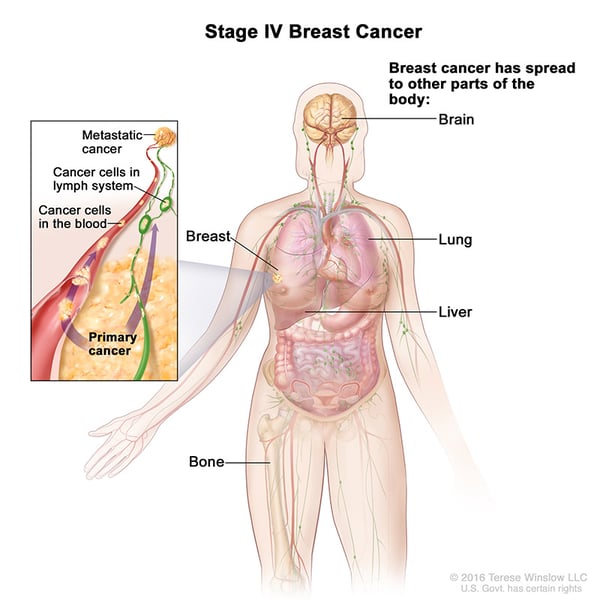 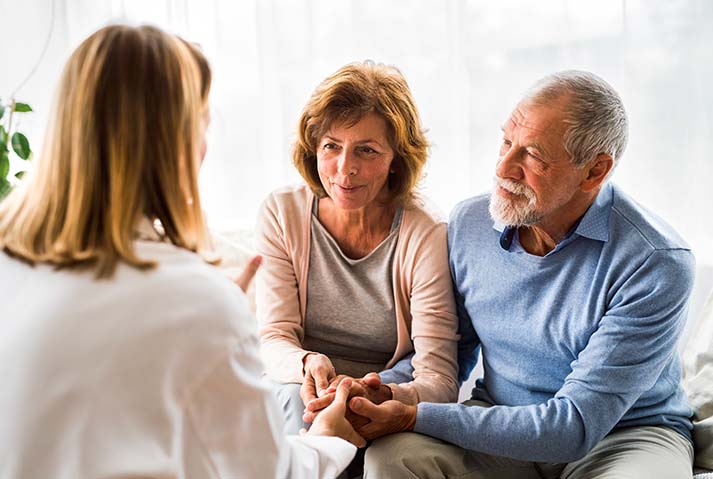 Unfortunately, there are times when a patient’s cancer returns after being seemingly destroyed by treatment. This is called recurrent cancer. Recurrent cancers typically happen because undetected cancer cells remained somewhere in your body after treatment. Your breast cancer may return in the breast or chest wall. Or, it may return in any other part of the body, such as the bones, lungs, liver, or brain. 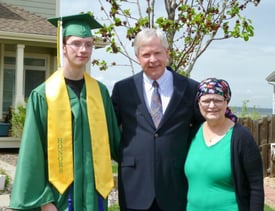 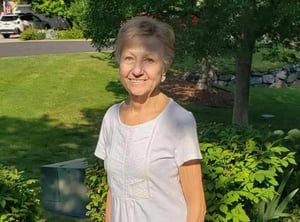 The Role of Lymph Nodes in Breast Cancer

One of the first places breast cancer can spread and grow is in nearby lymph nodes, which are part of the body’s lymphatic (lymph) system. Your immune system— the body’s defense against infection and disease— relies quite a bit on the lymphatic system, which is made up of three parts:

The primary function of the lymph system is to circulate the lymph, which contains infection-fighting white blood cells, throughout the body and to flush your body of toxins, waste, and other unwanted materials.

As breast cancer cells multiply, they can enter the lymphatic vessels that are located in a woman’s breast tissue. The lymph fluid then carries the cells throughout the body. Oftentimes, the lymph nodes in the underarm area are the first place breast cancer will start to grow since they are the closest to the breast.

The tests used by your Rocky Mountain Breast Specialists oncologist to determine that there are breast cancer cells in the lymph nodes is called lymph node evaluation.

To determine if lymph nodes are involved in your breast cancer, your surgeon will remove one or several underarm lymph nodes (at the time of the tumor removal) so they can be biopsied and then examined under a microscope.

Lymph nodes can be checked in two different ways. The most common and least-invasive method is called sentinel lymph node biopsy. The other is called axillary lymph node dissection.

In most cases, lymph node surgery is done as part of the main surgery to remove the breast cancer. There are times, however, it may be done as a separate operation.

Side Effects of Lymph Node Surgery

After breast cancer surgery and a lymph node biopsy, the lymph fluid may not move through the arm as well as it should for some patients. This condition is called lymphedema, causing swelling and discomfort in the arm.  The Rocky Mountain Breast Specialists are dedicated to helping patients avoid this condition through our Lymphedema Prevention Program. 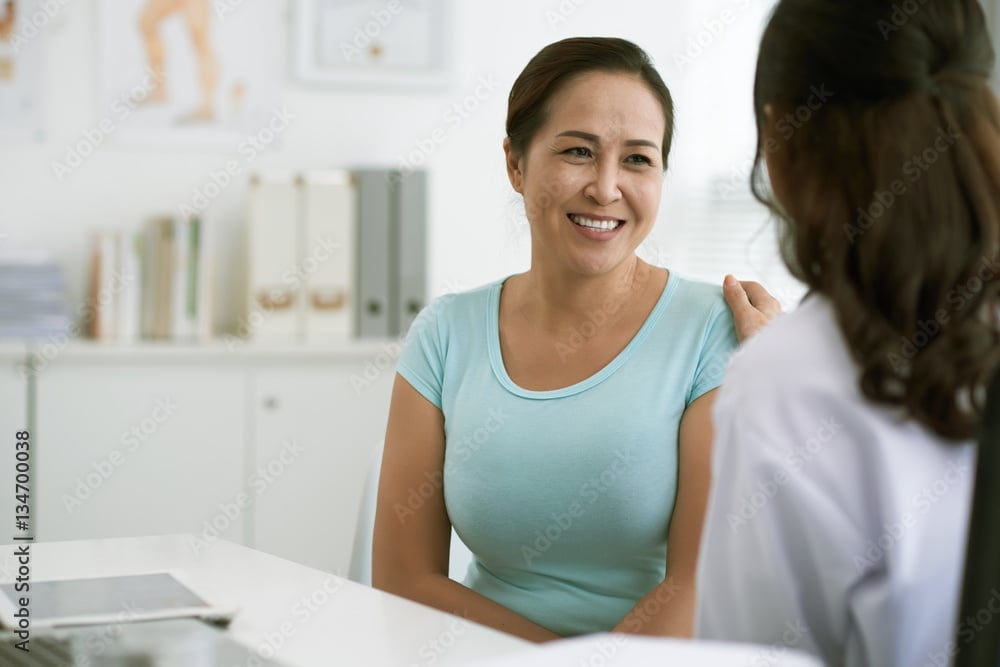 After the tissue from your biopsy has been examined, your Rocky Mountain Breast Specialists oncologist will go over the results (called a pathology report). The pathology report will show how many lymph nodes were removed and how many were “involved” (tested positive for cancer). This is referred to as lymph node status.

Breast cancer that has not spread to nearby lymph nodes, is referred to as node-negative status. If the report indicates that cancer is present in the lymph nodes, this is referred to as node-positive status. Positive results also mean that the cancer may have already or could possibly spread to other organs, such as the bones, lungs, liver, and brain. In order to determine that, your RMBS oncology team would need to conduct further tests.

The pathology report will also show how much cancer is in each node. Cancer cells can range from small in size and few in number to large in size and many in number. This information may be reported as:

Breast cancer treatment decisions and prognosis (outlook) can be affected by lymph node status. It’s important to remember, however, that life expectancy and treatments are improving all the time. If there is cancer found in the lymph nodes, your breast cancer specialist might recommend chemotherapy in addition to surgery, since chemotherapy can attack cancer cells throughout the lymph system.

Early detection is key. This is why we highly recommend you perform self-exams at home and schedule regular mammograms. If you have any concerns about your breast health be sure to talk with your primary care physician or your gynecologist. The earlier breast cancer is found, the less chance there is of it spreading to the lymph nodes.