There's no sure thing when it comes to whether you'll develop lung cancer in your lifetime. It can affect anyone. However, there are several factors that can leave you more susceptible than other people. While there are some obvious risk factors, such as smoking and exposure to certain chemicals like asbestos, other risk factors aren’t quite as well-known. At Rocky Mountain Cancer Centers (RMCC), we feel as though knowledge is power— the more you understand the risk factors for lung cancer the better equipped you’ll be when it comes to taking preventive measures to reduce the likelihood of developing the disease.

Tobacco Use and Lung Cancer Risk

If you’re a smoker, we highly recommend you take steps towards quitting. Not only is tobacco use the number one risk factor for lung cancer, but smoking also contributes to other health problems as well. Tobacco users' risk of developing lung cancer goes up with the number of years and packs smoked per day. But it's never too late to quit.  Even if you've smoked for decades, stopping now can still have some positive impact on your health.

Lung cancer is also linked to cigar and pipe smoking, however, the risk may be lower in people who do not also smoke cigarettes. This, of course, varies based on the level of inhalation and quantity smoked per day.

Many people think that electronic cigarettes (vapes) are a safer alternative to traditional cigarettes— but there isn’t enough evidence to support that claim. Not only is it unclear if e-cigarettes work well to help people stop smoking, but the ingredients used in vapes are also questionable on whether or not they pose a health threat to those inhaling them. While they may not be as harmful as traditional cigarettes, they are still harmful— further proof that the best option is quitting all smoking-related habits.

Sadly, people who don’t even smoke at all can still have an increased risk if they inhale the smoke of others. This smoke from other people’s cigarettes, pipes, or cigars is called secondhand smoke. In 2006, the Surgeon General published a report that stated there is no risk-free level of exposure to secondhand smoke. This means that living with a smoker increases a non-smoker’s chances of developing lung cancer by 20-30%.

Learn more about the relationship between smoking and lung cancer.

Radon is a naturally-occurring radioactive gas that results from the breakdown of uranium in soil and rocks. It is odorless, colorless, and tasteless, and known to seep into various areas including building foundations, living spaces, and working spaces. Radon exposure alone increases the risk of lung cancer, but if you also smoke, that risk goes up even more. According to the US Environmental Protection Agency (EPA), radon is the second leading cause of lung cancer among Americans and the leading cause of lung cancer in non-smokers.

You can visit the Colorado Department of Public Health & Environment website for further information on radon risks in Colorado.

Asbestos refers to a set of six naturally-occurring fibrous minerals: chrysotile, crocidolite, amosite, anthophyllite, tremolite, and actinolite. It has been used in a number of different commercial and industrial capacities including roofing shingles, floor tiles, textile products, and automotive parts for decades.

While the dangers of asbestos exposure are well-known now, there was a time when people were regularly exposed without protection. People who have worked with asbestos, especially without protective gear, are more likely to develop mesothelioma, a type of cancer that starts in the pleura (the lining surrounding the lungs).

The lung cancer risk is much greater in workers exposed to asbestos who also smoke tobacco. 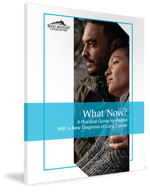 Get helpful tips on what to expect and how to prepare your mind and body for lung cancer treatment.

If you are a lung cancer survivor, there is a risk that you may develop lung cancer again, especially if you smoke. Your risk of lung cancer may also be higher if your parents, siblings, or children have had lung cancer— especially if the relative was diagnosed at a younger age. It is unclear how much of the risk is due to shared genes and how much may be from exposure to environmental hazards like tobacco smoke and asbestos or exposure to substances such as radon, chromium, and nickel. There are, however, some instances when genetic testing may be appropriate. We encourage you to talk with your RMCC oncologist about whether you are a candidate for lung cancer genetic testing.

As mentioned earlier, there are other less-known risk factors that can also increase your risk for lung cancer. Some of these can include:

It’s important to understand that most cases of lung cancer are preventable. By avoiding exposure to risk factors, you can significantly limit your chances of developing lung cancer.

If you have been diagnosed with lung cancer, know that Rocky Mountain Cancer Centers is committed to helping you every step of the way. By providing access to advanced treatments and supportive cancer care customized to your specific needs, we will battle lung cancer together.