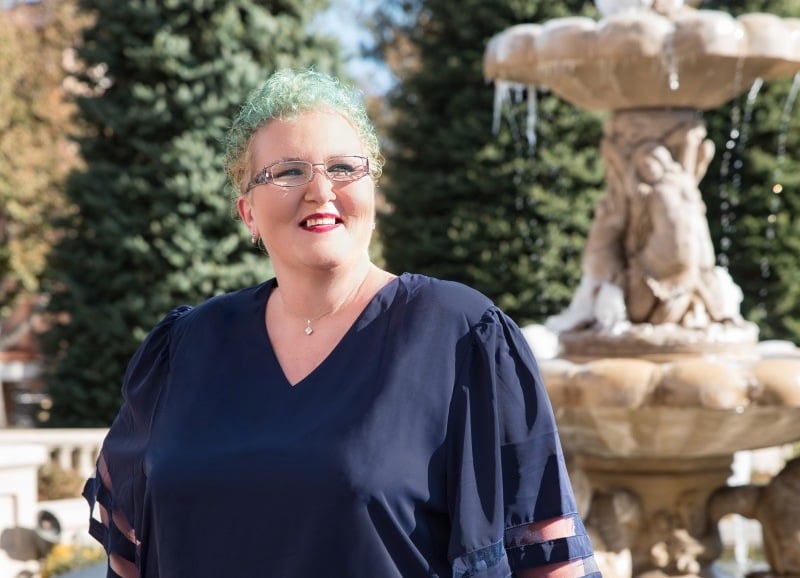 Tracy Jimenez was 45 years old when she started noticing a few changes in her health. Her periods became erratic, sometimes lasting just a day and other times a week; sexual intercourse was painful; and her lower back and the backs of her legs hurt constantly. Jimenez didn’t have health insurance so she put off going to the doctor until the pain got worse, prompting her to go to the emergency room.

“At the hospital, I was told my pain was a sciatic nerve issue to be treated with ice and heat,” said Jimenez, a Longmont resident. “They didn’t do a pelvic exam or ask about my reproductive health history or anything about that part of my body.”

The pain continued for months until the day before her 46th birthday, she passed what looked to be a piece of flesh from her vagina.

“I knew right then something was wrong,” she said. “The day after my birthday, I went back to the ER. This time, they took me in for a CAT scan. After the scan, the ER doctor came in the room and handed me a card. He told me they saw a mass and that I needed to contact the doctor on the card ASAP.”

Terrified, Jimenez was able to make an appointment for the following day. The doctor she saw informed her she had an 8-cm tumor on her cervix and diagnosed her with stage 2b cervical cancer. That was in 2016.

“I did not know what to say or think,” she remembered. “I burst out into tears. I knew my life had changed forever. I didn’t know what HPV or cervical cancer was. I was scared I was going to die.”

Jimenez underwent 28 rounds of radiation at a hospital in Longmont, followed by six chemotherapy treatments at Rocky Mountain Cancer Centers in Longmont. She also underwent four rounds of internal radiation known as brachytherapy, a procedure that involves placing radioactive material inside your body, at Rocky Mountain Cancer Centers in Thornton.

“I liked how compassionate they all were to me at Rocky Mountain Cancer Centers when I was doing my treatments,” she said. “They were very caring and seemed to know exactly how I felt and what I needed.”

As a single mom to three children, Jimenez is the first to admit she put her own health on the back burner for years. She had health insurance inconsistently and “was always busy and had no time or money for a gynecological exam when all seemed well,” she said.

Now, nearly four years later, Jimenez remains cancer-free and is an outspoken advocate for women’s health, as she doesn’t want anyone else to have to go through a cancer diagnosis. The American Cancer Society estimates that around 13,800 news cases of invasive cervical cancer will be diagnosed in 2020. Jimenez is part of a non-profit called Cervivor, and an advocate for Immunize Colorado. Thanks to her work, the mayor and city council officially made Jan. 28th Cervical Cancer Awareness day.

“Cervical cancer is nearly completely preventable and the best time to take action is before the disease ever develops, through vaccination and regular screening,” she said.

Almost all cervical cancers are caused by HPV, or human papillomavirus.

While more traditional Pap screening tests look for abnormal changes in cells collected from the surface of a woman’s cervix and can miss disease, newer technologies use the same type of sample but instead look for the presence of DNA from the HPV virus.

“A positive HPV test can identify if a woman is at risk and helps catch problems before they develop,” said Jimenez. “What’s reassuring is that a negative HPV result means you can trust you are at low risk of developing cervical cancer until your next routine screening exam.”

An HPV infection often shows no symptoms, and women like Jimenez, along with their partners, are often not even aware they have it.

“Most times the body’s immune system will clear the virus, but sometimes an HPV infection will persist and can develop into cancer,” Jimenez said.

“Cancer is not something I want anyone else to go through,” she said. “I am doing what I do now because I want to raise awareness. This disease is killing people weekly and it can be prevented. I also want women to know who are going through this that I am here. When I was going through all this I was alone, I had no one who understood and it really affected me. Today I am being that support person for women so they do not have to go through it alone.”