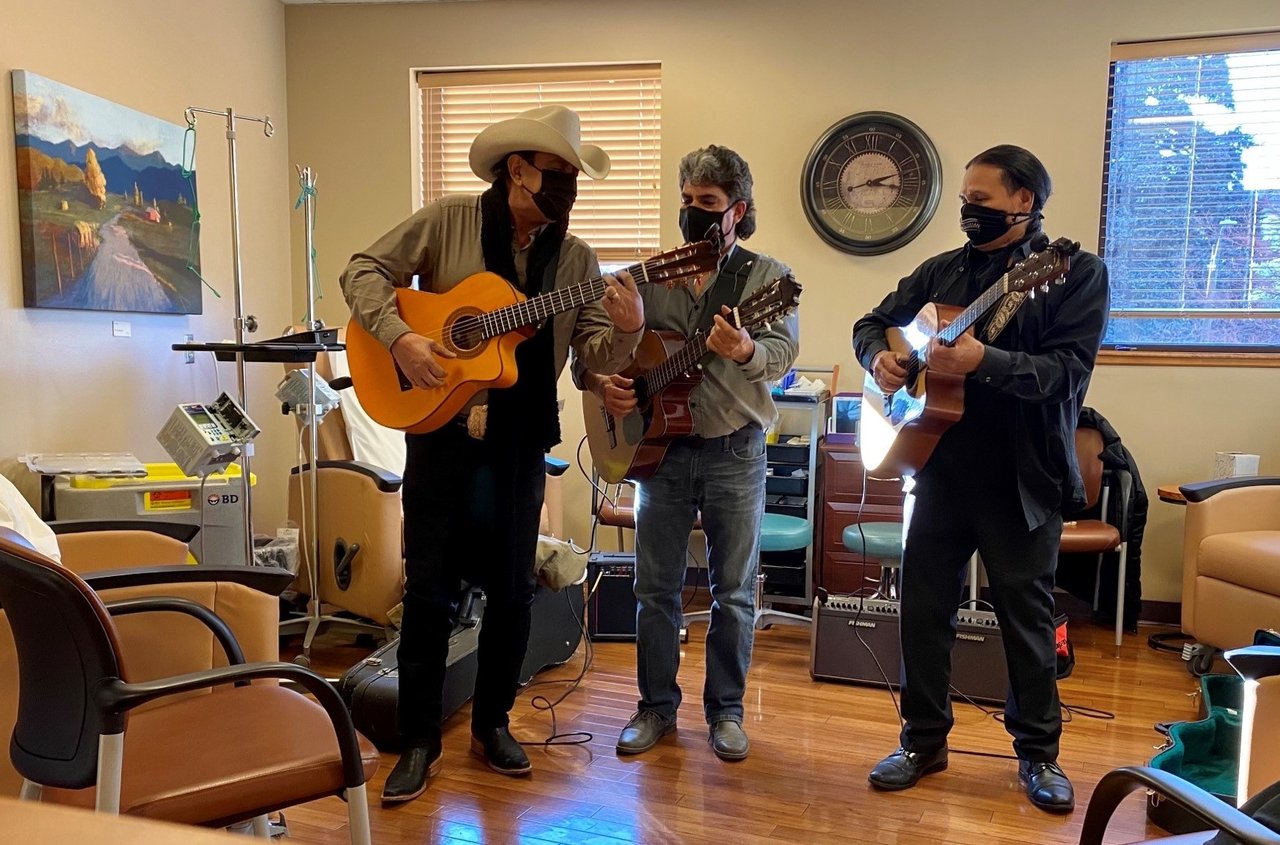 Just before Christmas 2021, Latin singer Beto Terrazas delighted physicians, nurses, and patients at Rocky Mountain Cancer Centers (RMCC) with a live performance. Though he sang only four songs, the performance actually took seven months to accomplish as Beto underwent treatment at RMCC for stage 4 colorectal cancer to regain his health and the ability to sing.

When two-time Latin Grammy winner and now colon cancer survivor Beto Terrazos recorded Vive with Montez de Durango, he didn’t know it would be a chart-topping hit in Guatemala and El Salvador. Nor did he know that the song, which was intended as a call for hope amidst the emotional devastation of the Covid pandemic, would contain a message for himself as well. Roughly translated, the invocation is: Enjoy life while you can because you can’t take anything when you leave this world. But, seven months ago, in the middle of a performance tour, Beto had to be flown home for emergency treatment because of excruciating pain in his pelvis.

Talking with Beto now – with his melodious voice and impeccable manners – it’s hard to imagine him in distress. But, Beto said, “My pain was so severe, I asked God to take me there on the plane.”

Back in Colorado, he was diagnosed with colon cancer, and surgeons operated within days, removing not just the cancer but also his colon and half his stomach.

“Being sick like this, it changes the simple life you have. You never expect it, you never know when you’re gonna get sick,” Beto said. “I mean, cancer. I never felt it, never felt sick. It was a complete shock.”

The Things That Get You Through

After his surgery, Beto went through chemotherapy with RMCC oncologist Dr. Allen Cohn, who told Beto throughout his treatment that he wanted to hear him sing someday. Both Beto and his wife were forced to stop working to deal with the onslaught of appointments and procedures. Though it was a challenging time, Beto had many things in his favor:

Born in Chihuahua, Mexico, the colon cancer survivor has lived in the US for 42 years and is fortunate to have his mother and all his brothers and sisters living nearby. Additionally, as an international musician, he receives emotional support from fans and friends around the world.

“Being a musician, I have a thousand people coming to my house, cheering me on: ‘don’t give up, we’re here for you, we’re praying for you,’” Beto said. “I have a lot of friends that push me to keep on going.”

But Beto had something else to carry him through: an incredible love for his wife. “I married my wife when she was 15, and she had two kids. We’ve been together 43 years. She’s an amazing woman. When you spend so much time with your wife, your love becomes different. You can handle anything as long as it’s not a divorce!”

The chemotherapy treatment changed Beto’s voice, and he gave up singing and performing. Though he tried to play guitar a few times, neuropathy made his fingertips numb. With the loss of his beloved music, it would have been easy to succumb to hopelessness, but Beto, instead, made a positive decision: He decided to start walking.

“Every day, I go walking. It doesn't matter if you feel weak, if you feel sick, you go out and walk. I don’t go long. But, even if you’re tired, you have to do something.” 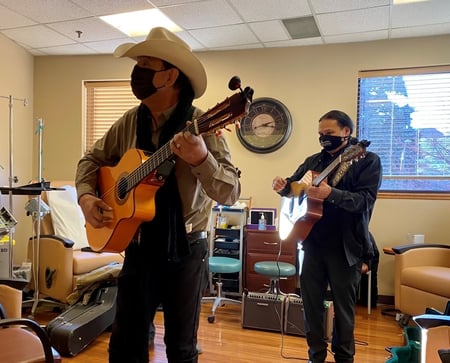 Though he has worked many jobs in his life, primarily as an electrician, Beto’s lifelong calling has been music. He’s played instruments - including saxophone, flute, accordion, drums, bass, and guitar – his entire life. He started playing the violin when he was just a child. He’s also been a singer and recording artist for the majority of his life. He humorously describes his music as “sometimes good, sometimes bad, sometimes ugly.”

“Music has a lot of healing we don’t understand,” Beto said.

Thus, when he began to feel better and his voice returned to normal, Beto decided to bring some of that healing into RMCC for his doctors, nurses, and other cancer patients.

“I have never been in a hospital more prepared than that,” Beto said of RMCC. “The nurses are incredible. I call them angels; they make you feel like a king. They’d do anything for you, every one of them.”

This is saying a lot for the colon cancer survivor who was once lauded as the “King of Durango Music.” So, after seven months of surgeries and cancer treatments, Beto made good on his promise to play for his doctor – as well as everyone else at RMCC who had helped him along the way.

Music, art, and other creative expressions - as well as social support and meditation - can help cancer patients find emotional stability through the stresses of treatment. Find out about the diverse events RMCC offers patients to offer emotional support.