Kathryn Gray Is Back on Track After Breast Cancer 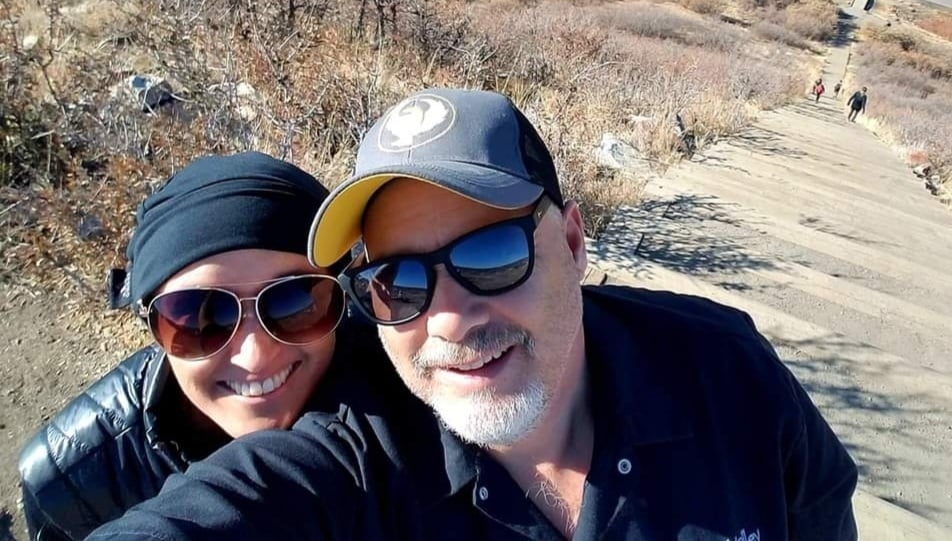 For Kathryn Gray, running is a way of life. The Castle Rock, Colorado, resident ran her first road race around age six. Since then, she has trained for, recovered from, and completed countless races. But during the summer of 2019, she faced a problem she couldn’t outrun.

One morning after a run, the then 38-year-old was taking a shower when she noticed a lump in her right breast. Normally, Kathryn stayed away from doctors’ offices. She was healthy, so she didn’t see a need. Early that fall, she scheduled an appointment to check it out.

She had a breast exam on Sept. 6, 2019, and a mammogram three days later. The next morning, Sept. 10, she underwent a biopsy. Kathryn turned 39 on Wednesday, Sept. 11, but her day of celebration was interrupted by life-changing news. She had breast cancer.

“It made for a pretty rotten birthday,” she said. “But I was grateful for how quickly I received the diagnosis, so I could begin the process of restoring my health.”

Kathryn’s breast cancer was still in an early stage – but just barely. Breast cancer stages range from 0, when abnormal cells are found but haven’t spread beyond the original site of the cancer, to 4, when the cancer has spread beyond the breast and nearby lymph nodes to other parts of the body. Kathryn’s team reviewed her case, considering factors such as the tumor’s size and whether it had spread to the lymph nodes, and couldn’t agree on a classification of stage 2 or stage 3.

Regardless, her cancer had not spread beyond her breast or the lymph nodes in her armpits. This was good news. Kathryn’s chance of survival over five years was relatively high, based on statistics published by the American Cancer Society.

This optimism was offset by Kathryn’s need for prompt treatment. Although the cancer hadn’t spread, it was growing quickly and might spread beyond the breast.

“When I met Dr. Basche, I was confident that I was in good hands – I was going to be okay,” Kathryn said. Her initial high opinion of Dr. Basche remained unchanged throughout her treatments. In fact, Kathryn describes Dr. Basche as “incredible.”

“She’s so knowledgeable and always listened to what I had going on,” Kathryn said.

Three Modes of Therapy with One Goal

“I'll never forget my first round of chemo,” she said. “Everyone took the time to explain everything they were doing, why they were doing it, and what I should expect. They made a scary time less scary.”

To treat Kathryn’s breast cancer, Dr. Basche and the RMCC team decided on a three-pronged approach that included:

Though Kathryn was a serious runner for years, she didn’t always pay attention to how she fueled her body. That changed in 2016, when she started paying close attention to what she ate. She began following a nutrition program and learned how good her body could feel based on what she ate or, just as importantly, what she didn’t eat. This completely changed how she approached food. It also made it easier to get the nutrition she needed during cancer treatment.

“I’m so grateful that I learned how different foods make me feel beforehand,” Kathryn said. “I was able to use all that knowledge during my treatment to keep feeling my best.”

The food connection was particularly strong while receiving chemotherapy. Though her chemotherapy side effects were minimal, Kathryn often felt nauseated a day or two after each treatment. Along with taking anti-nausea medication, she stuck with the tried-and-true BRAT diet: bananas, rice, applesauce, and toast.

Eating during cancer treatment isn’t always easy. Some treatments ruin the taste of food and take away your appetite. However, Kathryn recommends others going through cancer treatment eat no matter how they feel.

“Food can help you stay strong and keep your immune system strong, so eat, even when you don’t want to and it doesn’t taste good,” she said.

Running Toward the Future

Cancer-free since February 2020, Kathryn is back on her feet, chasing dreams and helping others do the same.

Today, she runs five days a week and does strength training two or three times a week. Since finishing treatment, she’s run one full and one half marathon. She has plans to run several 5Ks and 10Ks in the coming months. In January 2023, she’ll begin training for the Boston Marathon. Her goal: to run it in less than three hours.

“I set that goal for myself years ago, and after my cancer diagnosis, I thought I lost my chance,” she said. “Then, I realized that was just a story I was telling myself, so I told myself a different story: that I would run even faster after treatment.”

She got an early boost of confidence in June 2022, when she set a new personal record, shaving nearly 15 minutes off her previous best marathon time.

As a cancer survivor, Kathryn has found her calling. She loves sharing her knowledge of nutrition and the mind-body-spirit connection. She launched Stepping Stones Health & Wellness to provide health coaching services and share her knowledge to help others make positive changes. She also works with local schools, serving as a behavioral coach.

And it’s all thanks to her cancer journey, a journey made much easier by her supportive family and her expert, compassionate team at RMCC.

“My life is even better than it was before my diagnosis, and I’m so grateful to everyone at RMCC for helping me through each step of my treatment,” Kathryn said. “My care team was the absolute best. The way they worked together to make me feel cared for was incredible. I felt they knew and truly cared for me.”

Want incredible, personalized care on your cancer journey? Find an RMCC clinic near you and request an appointment.