Symptom Awareness is Key When it Comes to Ovarian Cancer 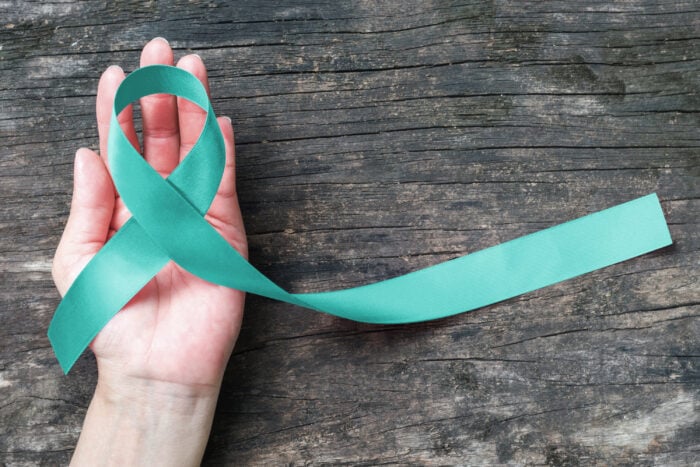 When it comes to your body, it’s important to pay attention to even subtle changes or symptoms. Ovarian cancer is the second most common gynecologic cancer in the United States, and causes more deaths than any other cancer of the female reproductive system, according to the Centers for Disease Control and Prevention. Ovarian cancer is often diagnosed in later stages because of somewhat vague symptoms. In honor of Ovarian Cancer Awareness Month, we’re reminding women to pay close attention to any new abdomen or pelvic-related symptoms. Certain recurring symptoms, though subtle, are linked to ovarian cancer, said Dr. Daniel Donato, a gynecologic oncology surgeon at Rocky Mountain Cancer Centers.

“That’s the biggest problem we have — women will ignore little symptoms for months,” Dr. Donato said.

The symptoms can be non-specific, and thus hard to diagnose — abdominal bloating and/or pain; urinating more frequently; unexpected weight loss or gain; and more rarely, vaginal bleeding.  The symptoms typically are either ignored by the physician or so minimal that they go unreported. It is not until pain or abdominal distention becomes more symptomatic does the disease finally get diagnosed. “At that point, it’s usually stage 3 and it’s already spread outside the ovaries and inside the abdomen,” he said. “The survival rate is somewhere around 30 to 40 percent at that stage, whereas stage 1 has a 90 percent survival rate.”

Advocate for Your Health

A recent data analysis found that most women diagnosed with ovarian cancer — over 90 percent — experienced abdominal and pelvic-related symptoms and visited a physician with this complaint anywhere from six to 70 months prior to diagnosis. This indicates that symptom awareness is very important when it comes to diagnosing ovarian cancer, which in 60 percent of cases is typically diagnosed at stage 3 or 4.

The problem is some women ignore the symptoms for too long, or if they do go to see their primary care doctor, it’s misdiagnosed.

“Lots of doctors won’t even do a pelvic exam,” Dr. Donato said. “They blow it off as reflux or indigestion or IBS and give them medicine instead of doing a pelvic exam or x-rays to make sure they don’t have a tumor.”

If whatever your physician treats you for doesn’t get better in a week or two, Dr. Donato recommends calling them back or returning to the office and pushing the doctor to investigate the cause further. It comes down to not being afraid to advocate for your health, Dr. Donato said.

“I tell my patients to be their own advocates,” he said. “Push (the doctor), say ‘you know what, can we do an ultrasound or a pelvic exam?’”

“When we have a chance to talk to primary care docs, we tell them if you see nonspecific abdominal symptoms in a post-menopausal woman, do a pelvic exam, and consider a pelvic ultrasound.”

For women who were diagnosed early, at stage 1 or 2, it was typically “serendipity.”

“Often, they came in for another cause; they had acute onset of pain, or someone did an x-ray for a back problem and found a mass, or a routine pelvic exam revealed a mass,” Dr. Donato said.

Most women who are diagnosed with ovarian cancer are post-menopausal, but that’s not always the case. Case in point is an 18-year-old Dr. Donato is treating. She hadn’t had a period in a year or two and was starting to grow hair on her face. She visited her primary care doctor who ran some blood work. The tests revealed a high serum testosterone level. The doctor suspected polycystic ovarian syndrome but didn’t perform a pelvic exam.

A week later, the teenager sought care for acute abdominal pain. An ultrasound revealed an 11 cm tumor on her ovary.

“We’re going to go in and take that mass out,” Dr. Donato said. “It could be an ovarian tumor secreting male hormones, which can occur in younger women.”

The doctor may have picked it up on a pelvic exam but opted not to do one.

“Some PCP’s hesitate to do them but it really should be part of the physical exam,” Dr. Donato said.

There are some steps you can take to reduce your risk of ovarian cancer, Dr. Donato said. It’s important all women get a pelvic exam annually. If you see a primary care doctor for your wellness check and they don’t perform pelvic exams, then see a gynecologist — “even if you’re not having symptoms,” Dr. Donato said.

“We’re still waiting for a screening test that will allow us to pick up ovarian cancer at an earlier stage, then we could cure 90 percent of women. But for now, an annual pelvic exam is all we have,” he said.

Additionally, if you have a family history of ovarian or breast cancer, you should let your doctor know, as you may be a candidate for genetic testing to see if you carry genes that can increase your risk for breast and ovarian cancer.

And if you’re having any symptoms, however subtle, “don’t wait months. Go see your doctor,” he said.