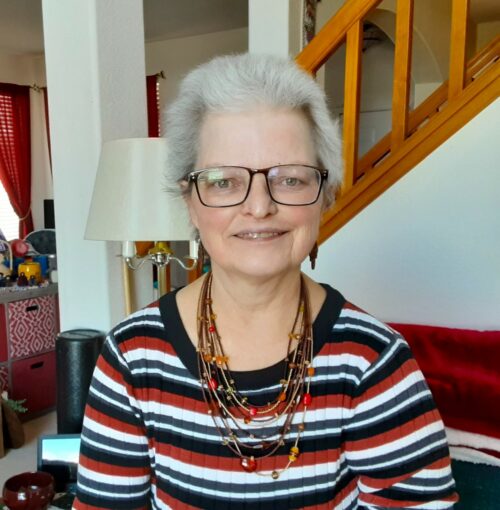 Here’s an opinion that might surprise you: “If I had to pick a year to have cancer, 2020 would be it.”

That’s coming from breast cancer patient, Erika Simon, of Morrison, Colorado. Her reasoning? “I had to pretty much stay home and do nothing anyway,” so she wasn’t missing out on much. 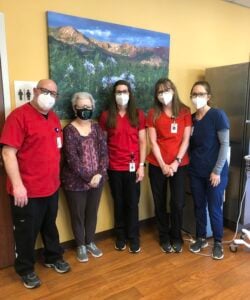 Diagnosed with Invasive Ductal Carcinoma in January of 2020, Erika sought treatment at Rocky Mountain Cancer Centers for the Stage 4 metastatic HER2-positive breast cancer. The diagnosis scared Erika, no doubt, but she was grateful when her doctors gave her another diagnosis in April 2021:  “No Evidence of Disease.”

“That’s as close to a ‘cure’ as you can get with Stage 4,” she explains. “I never thought I’d hear the words ‘you’re cancer-free.’”

Getting to the point of being “cancer-free” was not an easy path. It took 14 months and a range of customized cancer treatments, including surgery, chemotherapy, radiation, a cocktail of targeted agents – and all the side effects that went along with them.

Erika hadn’t been having routine breast cancer screenings and was 59 when symptoms (pain in her arm, a swollen armpit) prompted her primary care physician to recommend she get a mammogram. By the time Erika’s breast cancer was diagnosed, it had already spread to her lymph nodes and beyond.

RMCC cancer doctor, Dr. Manojkumar Bupathi, and Erika’s treatment team prescribed chemotherapy first, to shrink the tumors. Then, surgery to remove them during a double mastectomy, followed by radiation and advanced cancer treatment with agents that specifically target HER2-positive cancer.

Targeted therapy, or precision medicine, is part of the latest approach to HER2 breast cancer that provides a personalized treatment plan targeting specific markers from patient pathology tests. This personalized strategy is both more effective at killing cancer and better at reducing the unnecessary side effects from broader, systemic treatments.

The entire process took a little over a year. And, despite the fact that 2020 could be considered a good year to miss, it wasn’t the time involved in cancer treatment that was most daunting. It was the physical and emotional toll. Erika’s first round of chemo was arduous, much more difficult, in her opinion, than surgery, radiation, or subsequent chemo treatments with targeted agents.

“Eventually it does end,” Erika says of what felt interminable at the time. 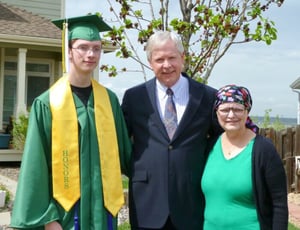 “The nurses at RMCC were awesome,” Erika says. “Because of COVID, my husband was only allowed to come to my first treatment. But the nurses would always stop and talk, and bring warm blankets.”

Prior to her cancer diagnosis, Erika had been knitting and crocheting “Chemo Caps” to donate to RMCC patients as part of the charity Loving Hands at St. Frances Cabrini Catholic Parish. She never imagined she might one day need one herself. During her chemo treatments, Erika delivered the bags of hats, a role she continues today, except for a pause during COVID when donations were not permitted.

Another thing that helped Erika was CaringBridge, a free online tool that allows cancer patients to share their stories and communicate medical information with everyone in their lives at once. It allowed Erika to express herself and keep the people who cared about her updated – without the exhausting and time-consuming labor of texts, emails, and phone calls. One friend even organized a Meal Train through CaringBridge, coordinating meals for Erika, her husband, and their son, Luke.

Some of the side effects of chemotherapy – food tasting terrible, fatigue, peripheral neuropathy, a forgetfulness called “chemo brain” – have already gone away or will continue to improve as time goes on. For example, the hair Erika lost during her first round of chemotherapy has already grown back. 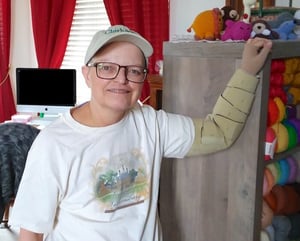 Other remnants of the disease and its treatment will very likely continue throughout her life. Lymphedema, which can sometimes result after surgery or removal of the lymph nodes, will need to be managed with a compression sleeve. And, Erika will have ongoing monitoring – for both cancer recurrence and for damage to heart muscles, which can sometimes be a delayed-onset side effect of chemo treatments called cardiotoxicity.

Still, recent advancements in cancer treatment have made Erika’s prognosis much more promising. Not long ago, a diagnosis of HER2-positive cancer was bleak.

“I had great doctors,” Erika says, listing off her oncologist, her surgeon, and her radiation oncologist. “I don’t think, through the whole process, I came across any medical professional who was not compassionate, caring, and honest. And I really valued their honesty. I was glad I knew what to expect and that they worked with me and listened to me.“

She felt as if everyone was on her side.

“Even the pharmacist,” Erika laughs. “When I talked to the pharmacist on the phone (to coordinate prescription deliveries) he said ‘we’re all pulling for you!’”