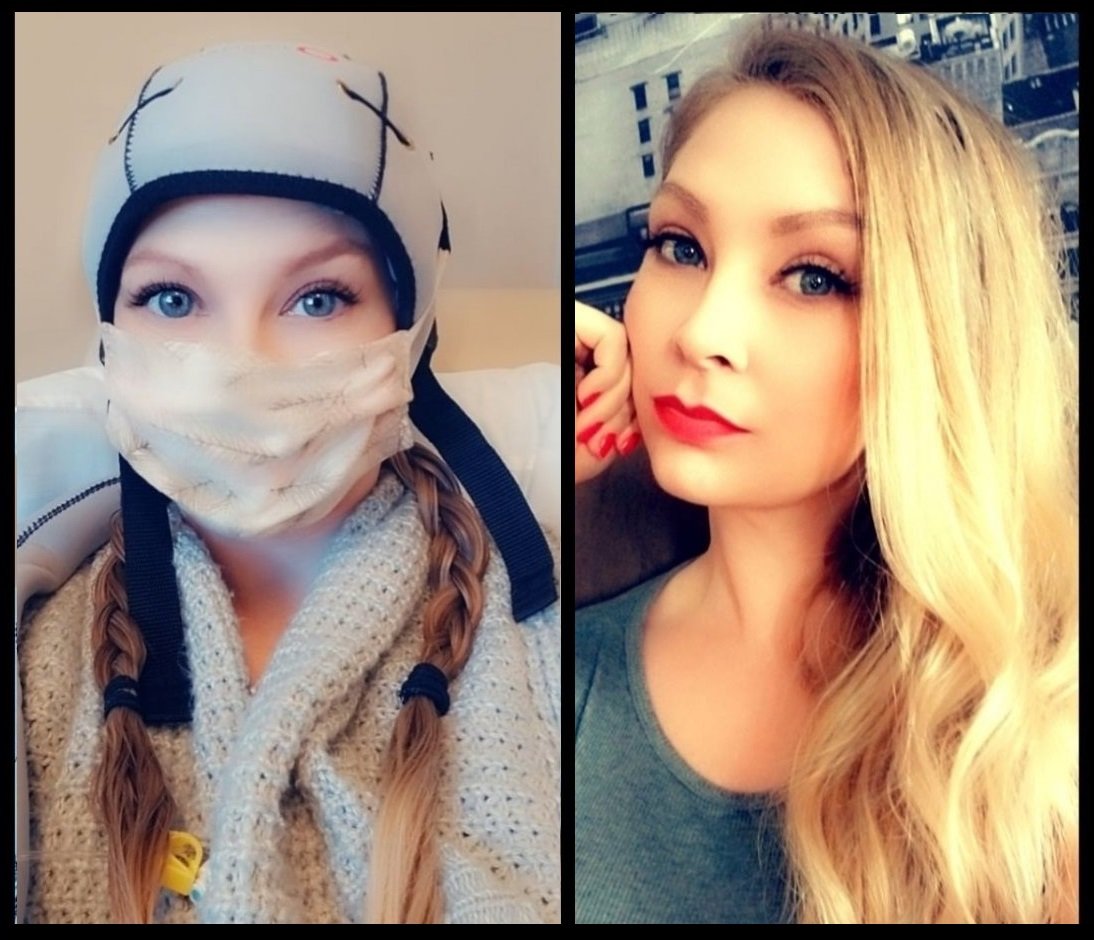 Chelle Wells, 35, was in the shower at her home in Monte Vista, Colorado, in early December 2019 when she felt a lump near the nipple on her right breast.

She immediately made an appointment with her gynecologist who ordered a mammogram and an ultrasound.

“I went in for the mammogram and that same day they said ‘can you come back at 1 p.m. for a biopsy?’ That freaked me out.”

After waiting for two weeks for the results, they arrived on New Year’s Eve: breast cancer – specifically invasive ductal carcinoma.

Related Read: Don’t Delay Your Cancer Screenings During a Pandemic

“When I went in for my appointment with the general surgeon, I found out [my breast cancer] was HER2-positive and fed by estrogen so she said to stop taking my birth control pills,” Wells said.

The local doctor referred her to a breast surgeon in Colorado Springs, Dr. Brianna McDevitt. Concerned about the lack of communication with getting her biopsy results and how long it took, Wells said she was set on getting breast cancer treatment in Colorado Springs, though she wasn’t sure she’d opt for treatment at Rocky Mountain Breast Specialists (RMBS) where she was initially referred. But after meeting with them, she knew it would be worth the six-hour round-trip drive for appointments.

“I felt like they had everything I needed there at RMBS and they were super nice to me,” she said. “I felt like they would not drop the ball on me there; I needed someone who was going to keep the ball moving and keep me informed the entire way and that’s what I got.”

“I didn’t want to chance a [cancer] recurrence,” she said.

While Wells’ genetic testing came back negative from known cancer-causing genetic markers, she said that doesn’t necessarily mean the cancer is not genetic.

“[Breast cancer] runs on both sides of my family,” she said, noting that both of her grandmothers had breast cancer as well as two paternal aunts and one maternal aunt.

“It’s weird because I always felt like I was going to get [breast cancer],” she said. “I knew young people who went through it so I felt like age didn’t matter so much.”

“I was concerned about how I was going to look after,” she said. “I was able to do nipple-sparing surgery. As (Dr. McDevitt) completed one side, the reconstructive surgeon came in behind her. They worked as a team. The most painful part was the incision in my armpit for the lymph nodes.”

A total of three lymph nodes were removed.

“One tested positive but as micrometastasis; it was only .05 millimeters on a ruler. Any smaller and it wouldn’t have been detected,” she said.

Chemotherapy was “unavoidable” given Wells’ age, the type of breast cancer, and that it had already started to spread. RMBS oncologist, Dr. Jesal Patel mapped out her chemotherapy treatment plan, which included six rounds of Taxotere, Carboplatin, and Herceptin every 21 days. Wells is now taking Herceptin shots every three weeks through April 2021.

“We wanted to be aggressive about treatment,” she said.

After undergoing IVF egg retrieval to allow her the option of having children down the road, Wells started the first round of chemotherapy in April. She also opted to do Paxman Scalp Cooling, which is available to patients undergoing breast cancer treatment in Colorado Springs at RMBS. The system helps prevent people from losing all of their hair during chemotherapy. The system has helped more than 100,000 cancer patients in more than 25 countries worldwide retain their hair during chemotherapy, according to the Paxman website.

A friend of Wells who underwent chemo recommended it to her. And an online fundraiser Wells’ sister set up paid for it, she said.

“When I’m done with chemo, I want to feel back to myself,” she said. “My hair is to my waist, it’s super long and super healthy. It felt like something I could take control over and I was willing to try it out and see if it worked.”

During chemotherapy treatment, Wells would wet her hair and don her cooling cap 30 minutes before starting IV chemo.

“I wore the cap for every treatment,” she said. “It worked really well.”

While Wells estimates she lost 50 to 65 percent of her hair, she had a lot to begin with and she’s able to hide the thin patches, she said. She’s grateful to still have her hair.

While she was initially nervous about starting chemotherapy during COVID, she’s super grateful she did and that the majority of her treatment is now behind her. She’s also grateful to her medical team at RMBS.

“They were so attentive to my needs. I never felt like I was inconveniencing them by asking questions. Having a nurse navigator was very helpful. She’d go over things with me after each appointment and I felt like I was talking to a friend. That’s how I felt with all of the doctors there at RMBS — the rapport they built with me made me feel like they were concerned about me, and not just there to do a job.”

Wells credits her healthy diet, consistent fitness routine (even during treatment), and strong support system including her boyfriend and family as helping her during her cancer journey. A positive mindset was also crucial.

“I have always been a very optimistic person and I think that can really take someone a long way,” she said. “Your mindset determines everything and I feel like there is always a silver lining in any tough situation, you just have to be willing to see it.”