Why Would You Participate in a Clinical Trial?

There’s no doubt that cancer treatment has improved by leaps and bounds, and new advancements are continually happening. With the numerous promising treatments available – not to mention the sometimes overwhelming logistical details involved with coordinating cancer care – why would you participate in a clinical trial? Lamar Noriega, a Rocky Mountain Cancer Centers (RMCC) patient, shares what motivates him to participate in clinical trials.

Lamar Noriega had no symptoms of cancer when he was diagnosed in May 2017 at age 57. That’s not unusual for the type of cancer his primary care physician picked up with blood tests during a routine physical: multiple myeloma.

Within a week, Lamar got into RMCC to meet his cancer care team, including his oncologists Dr. Reznick and Dr. Burke.

“Multiple myeloma has 3 stages,” Lamar said. “The stage I had, it was ‘smoldering’ but not active. Sometimes, stage 1 can last 20 years – where you have it but it’s not doing anything. My numbers were really good. Dr. Burke said based on my health and age and early stage of diagnosis. I was a perfect candidate for a clinical trial.”

Participating in clinical trials means that a patient’s results and experiences are used to study the treatment they receive to improve efficacy and decrease risks for future patients. For Lamar, that was an important factor in choosing to participate in a clinical trial.

“We lost my mother to cancer,” he said. He also lost several other relatives to cancer. “I thought if this can help me and help others along the way, it’s worth it.”

Clinical trials are set up differently depending on the treatment being studied and can last for various periods of time. For example, some have a finite period of time and some continue to gather data from patients for their entire lifetime.

Lamar actually chose to participate in two different clinical trials. One trial, The Circulating Cell-free Genome Atlas (CCGA) Study (GRAIL-001) registry study, is intended to help doctors better understand why some people develop cancer while others don’t by studying their genes and cancer diagnosis over five years. While participating in the trial may offer his doctors some insights into Lamar’s genes and offer comparisons to other patients similar to him, his participation very likely won’t have a direct impact on his cancer treatment. But, Lamar has the satisfaction of knowing he’s helping scientists better understand his disease.

The second trial Lamar participated in, A Study to Evaluate Dara-CyBorD in Previously Untreated and Relapsed Subjects With Multiple Myeloma, allowed Lamar to benefit from promising medications not yet approved for general use and dictated much of Lamar’s course of treatment. 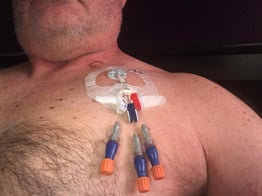 “I was scheduled to do the first treatment over two days to make sure I didn’t have any adverse reaction to the drug. Then it became a once-a-week infusion,” Lamar said. “I got a port put in, which made life a lot better. Since I was reacting well to chemicals and in good shape, in February 2018, I had a stem cell transplant, which would provide a better chance of good health in the long run.”

Lamar’s doctors paused his weekly chemo infusions for two months to accommodate the stem cell transplant and allow his body time to recover. Then, he returned to the clinical trial.

Now, the trial is completed and the medication has been approved for use in other patients like Lamar. However, the medications had proven so effective for Lamar, and his body had tolerated the treatment well that he continues to receive them for maintenance to keep his cancer in remission.

“I’ll stay on maintenance as long as it’s working,” said Lamar. “Eventually, the drug will quit working, but we can go to some other approved drug or do another clinical trial (for a medication not yet FDA-approved).”

All in all, Lamar has been more than satisfied with his cancer treatment and the decision to participate in a clinical trial.

“I have been so fortunate. I haven’t had anything go wrong, knock on wood,” he said.

Recently, he was even able to move – from Colorado to Minnesota – without any interruption to his cancer treatment, which will continue for the rest of his life. Now living west of St. Paul to be closer to family, Lamar said: “It was very smooth to move my treatment. Dr. Burke is sort of the ‘go-to guy in the multiple myeloma world,’ and he referred me to a  doctor in Minnesota (who was part of the US Oncology Network, like RMCC). I did my first treatment yesterday.”