Cancer survivor Carol Levey has strong feelings about a phrase most cancer patients long to hear.

“I think they should take the word ‘remission’ out of the dictionary,” says Carol, a business owner, stepmother, grandmother, and great-grandmother. “Because ‘cancer remission’ implies that it’s coming back.”

While she’s not a cancer doctor or a medical expert, Carol knows plenty about cancer.

Getting Diagnosed with Cancer. Twice. 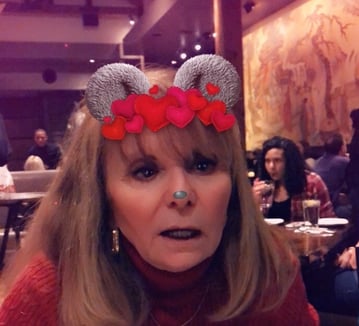 In Carol’s case, an unusual virus put her in the hospital and led to the discovery of an autoimmune disorder, which clued doctors in to breast cancer. After breast cancer treatment, Carol’s follow-up scans revealed an aneurysm and then the diagnosis of a second type of cancer: lung cancer.

“I was one of those people who thought I never needed a mammogram,” she says. “I was invincible. I traveled. I owned a business. I walked four miles a day. Well, surprise!” she jokes about the string of diagnoses that suddenly inundated her.

Instead of being bitter about what some might consider a streak of bad luck, Carol says: “In a strange way, it saved my life.”

A Team to Support Her Cancer Treatment

When Carol was referred to RMCC after receiving her breast cancer diagnosis, the first step, as part of comprehensive cancer care, was a meeting with all the medical providers involved in her treatment, including her oncologist, Dr. Sami Diab, as well as her radiologist, surgeon, and several others.

Carol received chemotherapy and radiation and what she calls a “relentless” number of tests and monitoring: CAT scans, MRIs, and follow-up appointments every three months. Hence, the discovery of her other medical issues during the process of treating her cancer. Carol says an important lesson she’s learned is to “be your own advocate” when it comes to your treatment. 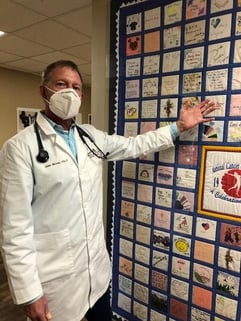 But the most important lesson she’s learned from this dizzying process is this: “You have to have people you can trust.”

“Through this journey, I’ve been blessed,” she says. “I made so many friends (at RMCC). It’s allowed me to keep a good attitude. Those nurses at the cancer center, they’re godsent! They’re the most wonderful, caring people.”

Her praise is even more enthusiastic for her Physician Assistant, John Novak. “He’s not only smart, he cares.”

Though the phrase “cancer remission” is common lingo among the general public, it’s not frequently used at RMCC. The Colorado cancer doctors are more likely to use terms like “curable cancer,” “treatable cancer,” “cancer-free” or the more tongue-tying “no evidence of disease.”

This reflects the numerous medical advancements that have turned many once-fatal cancers into diseases that can be managed with ongoing treatment. These cancers may or may not ever be “cured,” but they are “treatable cancers,” and, perhaps more importantly, patients can still enjoy a high quality of life with cancer.

For Carol, the shift in terminology away from “cancer remission” is more accurate and less daunting. “Your mind is so powerful,” she says. “The one word no one can take away from us is hope.’ And everyone needs hope.”

Through her cancer journey, one thing Carol has learned about hope is that it gets stronger when you share it with others.

“Someone gave me a Worry Angel when I got sick because I’m a worrier,” she says. “I took it with me everywhere. They’re just little, plastic figurines, so I went and bought a bunch of them and gave them to everyone at the Cancer Center. If I meet someone at the doctor's office who seems to need hope, I give them one.”

Having Cancer Changes Your Perspective

Carol has many sources of hope as she recovers her health. She credits her husband with “getting her through "when she was overwhelmed by the side effects of chemotherapy and radiation. With the upcoming birth of her seventh great-grandchild to look forward to – plus her three stepchildren and 16 grandchildren – Carol’s family gives her both strength and joy. Though she has a career passion providing business leadership and management consulting she would like to return to, Carol acknowledges that her priorities have shifted.

Facing cancer treatment and infusions for her autoimmune disorder in the midst of a global pandemic changed her perspective.

“I was traveling the world and on-the-go,” Carol says. “Since I’ve been home, I learned what’s really important: It’s about who you are, not what you are. You put the ego aside. It’s not about your title, not about how much you make. It’s about time with yourself, time with your animals, meaningful connections."