When Kathy Nafie was first diagnosed with melanoma at the age of 57 in March 2013, doctors projected she had only a few months to live. At the time, melanoma was considered fatal, and there were almost no treatments available. Plus, the few that existed could be just as dangerous as the cancer itself, as Kathy soon found out. No one who hears Kathy’s story – or Kathy herself – would ever call it “easy.” But, after nine years and six rounds of advanced cancer, Kathy’s learned much to share with others about what’s helpful for long-term cancer survival.

Melanoma: The Most Dangerous Skin Cancer

What makes melanoma so much more dangerous than other types of skin cancer is its ability to metastasize to other parts of the body before being diagnosed. Kathy called it “a fluke” that her cancer was discovered at all. “I had no sensation of anything wrong,” Kathy said.

Once the melanoma was discovered, Kathy had multiple surgeries to remove tumors until the margins were clean. Then, with no approved medications available in the U.S., her doctors put her on a drug approved in New Zealand. While the medication was extremely dangerous, it was Kathy’s only treatment option.

“I very nearly died. I had multiple organ failures and was in the ICU for 11 days,” Kathy said. “It was a very dire time. I’m a woman of faith. I can only say that’s what got me through because I didn’t make a conscious choice. But there were a lot of people praying for me.”

Kathy was in the hospital for three weeks and, when she was released, her husband of 20 years could not handle it. Six months later, he asked for a divorce. 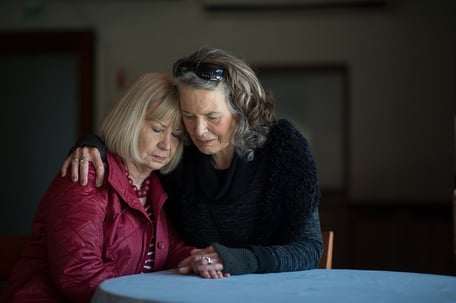 “Before I never made excuses. There was no room for excuses. I made things happen. It was hugely humbling to realize you need help,” Kathy said.

After the first attempt at fighting her cancer with medications – and the resulting damage to her body – Kathy’s doctors at Rocky Mountain Cancer Centers (RMCC) gave her a year to recover before attempting another treatment. Later treatments proved equally hazardous but they prolonged Kathy’s life. Still, her cancer has recurred many times, appearing in different organs including her brain and requiring the amputation of her index finger. Yet, over the ensuing years, new treatments that are safer and more effective have become available.

Now, in her sixth round of advanced cancer, Kathy’s oncologist, Dr. Sujatha Nallapareddy, has found a drug that’s successful at stopping cancer growth – and comparatively easy for Kathy to tolerate. “We watched it just dissolve the tumors in inoperable places,” Kathy said.

What It Takes for Long-Term Cancer Survival: Confidence in Doctors, A Reason to Get Out of Bed, Cognitive Therapy, and Exercise

Now, Kathy has seven grandchildren and is the executive director of a non-profit. In addition to finding the right medication (and buying time while new advancements are made in cancer treatment), there are many other things that have been critical for aiding Kathy in long-term cancer survival.

“I want to live,” she said. “And, to do that, requires a lot of work. This is a fatal kind of cancer – you don’t live through it. But I am living through it. It takes being willing to do whatever it takes to succeed and not let cancer win.”

To do that, she had to have confidence in her cancer care team. “I can’t say it enough how much I appreciate RMCC that I’m alive when I should not be,” said Kathy. “So, when Dr. Nallapareddy says to jump, I jump. Trust the doctors, they know what to do.”

Kathy had attempted to work for the first 18 months of treatment but had to retire when her health became too poor. But, after several years of clean PET scans, Kathy decided to return to work. “I thought: I’ve been in bed for the better part of six years. I’m sick of being in bed.”

Kathy said finding a job she could do (at non-profit Scope International) has done more for her mental health than anything else. “It gives me a reason to get up every morning.”

Another thing that has aided Kathy immensely is cognitive therapy. Her first, nearly fatal experience with the only drug available caused damage to her organs, including her brain. While some people she spoke with attributed Kathy’s ongoing cognitive difficulties to “chemo fog,” Kathy knew it was something more serious.

“I wasn’t functioning,” she said. “It was like someone had put a knife through my brain. It took me two hours to get dressed in the morning because I didn’t know what to do next. I had lists everywhere.”

Kathy shared her concerns with her team at RMCC and they responded with support and treatment. She was prescribed cognitive therapy, which has helped her return to what she considers 80% of her previous mental functioning. Now, it is much more common for doctors to prescribe cognitive therapy for patients with long-term cancer survival. “You can get the resources to learn how to manage it,” Kathy said.

Though Kathy never particularly enjoyed exercise, she discovered it made a huge improvement for both her mental and physical health over the years of chemo and long-term cancer survival. She joined a group through Colorado Parks and Recreation Association, called CancerFit, where she received practical instruction and emotional support. “Exercise has got to be in there. If you think chemo is bad, you have to start exercising. You’ll feel better, you’ll sleep better. There’s so many places where it got me out of my cocoon and helped me with the mental stuff I was dealing with.”

Fighting Cancer is All About Attitude. You Have to Keep Your Head Above it.

To help herself keep a good attitude, Kathy has a metaphor she’s used since early on in her cancer journey and updated over the years:

Say you have a nasty thorn in your foot and it hurts to walk. You’d ask someone to take it out of your foot and you wouldn’t grieve the loss of the thorn. You’d be so grateful it was gone! And everyone knows that what you do then is wash it out with water. Cancer is the nasty thorn we asked someone to remove. We aren’t to grieve that we lost a finger. (It took me a while to appreciate that I only lost my finger, not a whole arm). I remind myself often that chemo is what’s cleansing out the wound and washing out the places we can’t get to with a surgical knife.

“I’d like to say that it gets easier, but it doesn’t. It’s not easy. I’ve done the ‘getting angry.’ I’ve done the ‘I’m ready to give up.’ But none of those are the right answer. I know that I need to reach out to RMCC for support. Fighting cancer is all about attitude. You have to keep your head above it.” Especially when it comes to long-term cancer survival.

Physicians at RMCC are continuously looking for ways to improve treatment and outcomes for their patients including participating in clinical trials. Learn more about the latest advancements in cancer treatments, including blood cancers, lymphoma, and breast cancer.