Can I Be Screened for Lung Cancer? 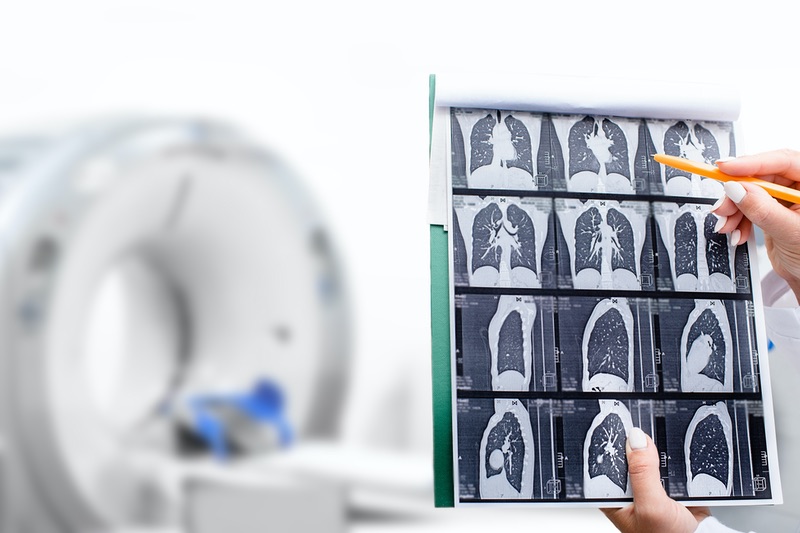 Many cancers, including lung cancer, can grow and spread for quite some time without causing any obvious symptoms. This is why screening tests have been developed for several types of cancer such as breast, skin, prostate, and now, for some people, lung cancer.

Without lung cancer screening, many patients would be diagnosed at a much later stage. And the later it’s found, the harder it is to treat effectively. Now, for the right candidates, doctors can have a look to see if there are areas of concern on the lungs.

What is the lung cancer screening test, and why are only some people considered candidates?

The test for lung cancer screening is a low-dose CT scan. CT scans are safe, painless, and are able to detect more than x-rays. These low-dose CT scans take just a few minutes and are performed outpatient, meaning they do not require hospital or clinic admission. This is more advanced than a chest x-ray that is sometimes used to identify spots on the lungs once they’re larger. The CT technology can detect areas of concern that may not be fully developed yet into something that can be seen on an x-ray.

Finding cancer earlier, in regular screening tests using low-dose CT scans, has improved outcomes for patients with a lung cancer diagnosis by making it easier to treat lung cancer. This often results in a longer survival rate for these patients.

The screening test is done before lung cancer is suspected. It’s also non-invasive, meaning that you won’t have any type of surgery or a biopsy as part of the screening process.

Not everyone needs to be screened for lung cancer. The US Preventive Services Task Force (USPSTF) recently updated the criteria for being eligible to have lung cancer screening tests performed. If you meet these criteria, talk to your primary care physician who can schedule the screening test.

Age and History of Smoking

All of the following criteria must be met to qualify for lung cancer screening tests:

A “pack-year” is a medical term that quantifies how much a person smoked over a period of time. According to the CDC, a “pack-year” is smoking one pack of cigarettes per day for a year. A 10 pack years could be from an individual who smoked a pack a day for 10 years or somebody who smoked two packs a day for 5 years. Talk with your doctor if you’re unclear as to whether your smoking history qualifies you for the test.

Most insurance plans, including Medicare, cover lung cancer screening if you qualify.

Deciding Whether You Should Screen for Lung Cancer

Again, the primary and most important benefit of lung cancer screening is catching the disease early, before it progresses and becomes harder to treat. You can add years to your life if you’re able to treat lung cancer before it has spread throughout the body. Early detection can also mean you need fewer treatments to put the cancer in remission.

But, like virtually all medical tests, there are some potential risks, even for qualified individuals.

No medical test is completely accurate. Despite providing better outcomes for many patients with lung cancer, it's important to remember that there is a chance that the test is not accurate, or the results are read incorrectly.

It is possible that your screening results in a “false positive,” meaning the test detected lung cancer when there is none. While doctors will typically order additional tests to confirm an initial finding (such as a biopsy), this can lead to unnecessary stress and concern that you wouldn’t have endured if your initial results were accurate.

Similarly, “false negative” results occur when a test fails to detect lung cancer. This could give you and your healthcare providers false peace of mind in thinking cancer is not present, when in reality, it is. The obvious risk here is that it would allow lung cancer to go unchecked until your next screening or until you become symptomatic.

No two people are the same. Similarly, no two types of cancer are the same either. For some, lung cancer may be causing significant symptoms or risks down the line. For others, cancer may be relatively slow-growing or it is not progressing and doesn’t pose an immediate threat to your health. For those who won’t need treatment right now, it can cause anxiety about your future. However, receiving the annual screening test can help relieve some of the anxiety by checking for cancer regularly.

While Rocky Mountain Cancer Centers does not provide lung cancer screening, we know that some patients will receive a positive result, meaning they need to consult with a cancer specialist called an oncologist.

Rocky Mountain Cancer Centers offers the latest lung cancer treatments throughout the state at conveniently located offices. If you or someone you love received a lung cancer screening test that shows possible cancer, request an appointment at the RMCC location closest to you to explore your next steps.