Days before her 40th birthday, Rebekah Layton, a mother and pastor from Highlands Ranch, was chatting with her husband and some friends. During the conversation, one of her friends opened up about another mutual friend’s recent breast cancer diagnosis.

“I was just stunned and, of course, asking questions about how she was and how I could be praying for her,” Rebekah said. “My friend told me our other friend’s breast cancer was discovered through some blood that was in her bra and on her bedsheet. It was just this tiny, microscopic amount. I had never heard of that before. I didn’t even know that that could happen.”

That very night, just two hours later, Rebekah noticed the same thing – a tiny amount of blood in her bra.

“I’m a working mom, so I think I wouldn’t have even given it much thought – except that I had just heard the story two hours earlier,” she said.

Rebekah wasted no time in seeking an answer. She immediately contacted a church friend who is a top-rated reconstructive surgeon. He guided her through the next steps, and she went in for imaging the following day.

“I knew the minute the radiologist walked in the room after the imaging was done,” Rebekah said. “I could tell the gravity of it. He was highly concerned and said, ‘You need to prepare yourself to hear a cancer diagnosis.’ That same week, I had a biopsy – and the day before my 40th birthday, they called with the diagnosis.”

“The cancer I had is called triple-negative breast cancer,” Rebekah said. “No cancer is a good cancer, but it just so happened that there wasn’t a targeted treatment yet for this type of cancer.”

Triple-negative is a rare form of breast cancer that usually grows quickly. It often doesn’t respond to many typical drugs used to treat breast cancer. This form of cancer is more common in women under 50.

“I had three tumors: The largest one was 4.9 centimeters,” Rebekah said. “At 5 centimeters, they automatically classify the cancer as stage 3. But mine was stage 2 because it had not spread to the lymph nodes and was just under that five-centimeter cutoff. On a scale of one to 100, in terms of how aggressive the cancer was, mine was an 87 in one tumor and an 89 in another, which meant it was extremely aggressive. My oncologist, Dr. Mabel Mardones, said she estimated I had only had the cancer for a couple weeks to maybe a month, two months max. The timing of the treatment was so critical. It was one of those situations where every single day mattered.”

As a busy mother and pastor, Rebekah knows things could have been different.

“For everyone, life is full – it could have easily become a scenario where I delayed and thought, I’ll get this checked out in a few weeks,” Rebekah said. “It was God’s grace to hear my friend’s story when I did, to discover the cancer, and then find treatment.”

“My immediate family has been blessed not to be impacted by cancer except for a grandmother late in her years,” Rebekah said. “So, I really did not understand. I just thought it was like any other diagnosis. I expected to go in and hear, ‘You’ve got cancer, here’s the treatment regimen.’”

However, she soon discovered that cancer treatment involves many unknowns and more decisions than she had ever imagined at the time of her diagnosis. 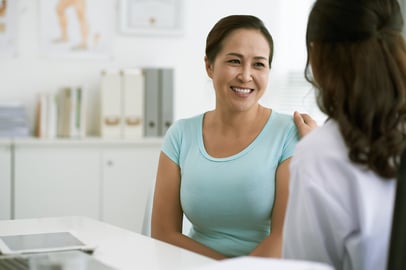 During the early days of her diagnosis, Rebekah got support from three friends with experience in healthcare.

She made appointments with five different oncologists and was surprised by the variations in approach and treatment options. It became clear to Rebekah that Dr. Mabel Mardones and Rocky Mountain Cancer Centers were the best fit for her.

“Dr. Mardones’ genuine care was evident from the very beginning. She literally came in an hour early on my 40th birthday to meet with me, because her schedule was booked out for weeks. In that conversation, she wanted to understand my goals,” Rebekah said. “She wanted to understand my approach. And she then helped me clearly understand which treatments most aligned with that. For me, my goal was eradication, no recurrence. Everything else, like aesthetics after treatment, was way down on my list – so far down, it wasn’t even on the list. She took the time to understand that from the beginning. I feel like I had somebody fighting with me that day and all throughout the journey. She is a brilliant woman. She is compassionate, and she is tenacious.”

“There are so many times Dr. Mardones came and sat with me in the treatment room even though she didn’t need to do that,” Rebekah said. “She always referred to my husband and my daughter by name and asked about them. She cared for me holistically. I shared very openly about my faith with her. I would say, ‘I’m praying, and here’s the decision that I hear God leading me in.’ And she supported me, not just medically. She was a supporter on every front at a very critical hour.” 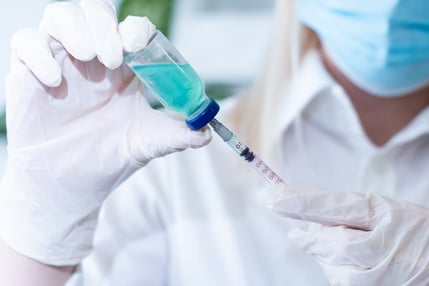 Rebekah was sure of her decision to have a combination of cancer treatments. However, she was unsure at the start if she would be able to receive the immunotherapy Dr. Mardones recommended. The medication, Keytruda, had been approved by the FDA to treat other types of cancer but was not yet approved for breast cancer. This made it difficult to access and afford as it was off label for her type of cancer.

“When we were discussing treatment options, Dr. Mardones put an actual paper – actual research – in front of me, the most recent study that had been published. Dr. Mardones said, ‘Here are the statistics without the use of Keytruda, here are the statistics with the use of Keytruda.’ She was incredibly knowledgeable and walked me through it and her rationale for why she was recommending what she was recommending.

“We made the decision, and RMCC helped us get there,” she continued. “There is no way we would have been able to pursue this treatment due to the cost, but RMCC worked with the drug manufacturer. RMCC completed an application for us, filed it, and pursued it. Dr. Mardones herself wrote a letter requesting it. And the company graciously granted it – it was a tremendous gift from God.”

Today, Keytruda is not only approved for use in certain types of breast cancer, but it’s the gold standard immunotherapy treatment for triple-negative breast cancer. Rebekah is grateful that RMCC was and still is at the forefront of care options and is willing to work to help increase patient access to groundbreaking treatment options.

During the year following her diagnosis, Rebekah received sixteen rounds of combined chemotherapies, immunotherapy, and radiation therapy at RMCC, as well as underwent two surgeries. She learned early in her decision-making process that it would not be an easy journey. Still, complications along the way posed unexpected challenges.

Dealing with the Unexpected

“One of the chemotherapies I was on is known for greatly impacting white blood cell count,” Rebekah said. “Dr. Mardones was doing things proactively to boost my white blood count before treatment. But, after my last chemotherapy treatment, there were a couple of days that I had just been feeling really weak and run down. When we called the symptoms in, Dr. Mardones created an appointment for me. When I arrived at RMCC, they ran labs, and then she met with me. It was the only time I remember her speaking the way she did in that moment. She said, ‘This isn’t good. I’ve called the ER, and we’re getting you over there right now.’ I was actually in septic shock, and it was literally a lifesaving call.”

Still, that was not the end of complications for Rebekah. “I was also allergic to one of the chemotherapies,” Rebekah said. “We had prayed about all the treatment options in advance, and that was really the determining factor for me. God was so clear on which regimen to pursue. Of course, just because God calls us to do something doesn’t mean it will be easy. Dr. Mardones worked tirelessly to find a solution to help me overcome the allergic reaction and allow me to complete the treatment regimen. She worked with other doctors and was working herself to find solutions. And I was able to complete it. The prayer and the goal were that the tumors would be completely eradicated with chemo and Keytruda and that the lymph node they took out during the mastectomy would be clear of cancer cells. And they were.”

Though she had the choice to end treatment there, after speaking at length with Dr. Charles Leonard, a radiation oncologist at RMCC, Rebekah decided to continue with the plan of receiving radiation to help prevent a recurrence. “Like Dr. Mardones, Dr. Leonard took an extended time to explain the benefits and risks of radiation treatment to me. He patiently answered my questions and demonstrated so much care and compassion. The RMCC staff – from the doctors to the nurses to the support staff – cares. They truly care, and it shows in their knowledge, in their support, and in their compassion.

Rebekah did not let the rough patches overshadow the community and relationships she found at RMCC.

“I received treatment during the COVID period,” Rebekah said. “Other people couldn’t go to appointments with you. There was a group of us who received radiation together, and we called ourselves ‘the breakfast club.’ The RMCC staff and nurses let us turn the waiting room into a morning get-together. It really became a bond. We were able to laugh and have joy in the midst of it and encourage one another in the community. It was really a gift. On our last days of chemo or radiation, the nurses and staff celebrated with all of us. There are no words to say how much that means.”

Fiercely Focused on What Matters the Most

Two years after her stage two triple-negative breast cancer diagnosis, Rebekah is cancer-free but not without side effects.

“I still have some inflammation in my joints,” Rebekah said. “It’s in the process of improving but has not been completely resolved yet. I have some digestive issues as well. But honestly, I don’t even talk about that much because I just feel so grateful to God to be alive. There are still those things, but those things are so small. Being alive and being given all these days is such a gift. I’m just grateful.”

“Is cancer good? No. I wouldn’t want anyone to experience this,” Rebekah said. “But my experience is that God can bring good out of the worst of suffering. I’ve always been a pretty focused person. There’s just a resolution in my soul. I want to be fiercely focused on what matters the most. And the things that matter for eternity and what matters here is sharing the hope and the truth found in Jesus Christ and loving people well. As a working mom, life is full and life is busy, but I genuinely feel so grateful for all those moments that I think it’s easy for all of us – me included – to take for granted. When you go through something like cancer, you become crystal clear and keenly aware that every moment is a grace from God. It’s a gift. And I hope that my life demonstrates that.”

Request an appointment with a Rocky Mountain Cancer Centers oncology expert to learn more about how we can support you through your cancer journey.